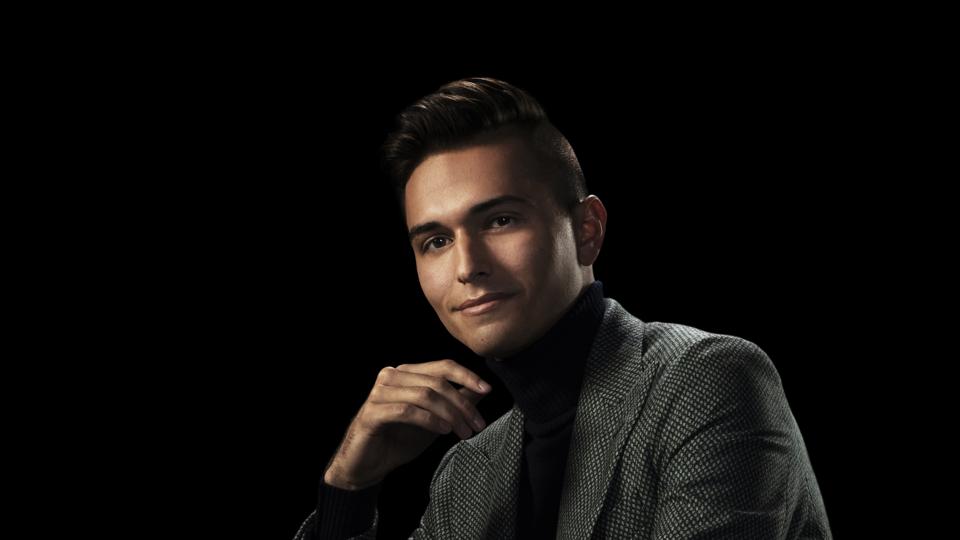 Fooji started as a bit of a joke, explains Erik Zamudio of the company he cofounded with Gregg Morton in Cincinnati while helping Morton build a separate startup. “In the office we would always run into issues deciding what we wanted to eat for lunch.” They thought, wouldn’t it be cool to tweet out a food emoji and have that food magically delivered to them? So they built a chatbot that enabled users to share an emoji that represented a preferred cuisine type, say, a burger, as well as an algorithm that would search GrubHub for the best of that cuisine. “And then we would send that food to you within an hour. Kind of like food roulette. You never knew exactly what you were going to get.”

Big brands soon took note, viewing it as a unique way to engage with fans by delivering products to their doors nearly instantaneously, bridging the gap between digital and physical experiences. And that’s what it has become. “Reinvention is breaking something down and completely revisiting what it meant originally,” Zamudio said. With Fooji, he’s reinventing paid media, letting brand fans get a physical product within an hour.

Verizon was Fooji’s first client in 2015; the company, with 27 employees and total funding of $4.7 million, now counts Disney, Amazon, Adidas, Unilever and Netflix among its roster and total revenue is more than $20 million.

Zamudio is just one of 30 young people on this year’s Forbes 30 Under 30 list transforming the practice of marketing and advertising. This year’s 30 are curious, daring, creative, driven and empowered—and they are using their skills and unique vision to start companies, reshape agencies and bring innovation to both new and legacy brands.

They are changing the dynamics of customer experience, leveraging the power of advertising and marketing in new ways. They hail from clients, or the marketers themselves, companies like Johnson & Johnson, L’Oreal, Anheuser-Busch InBev and Microsoft; and agencies—creative, digital, design, strategic, multicultural, or, now more typical, a blend of all three—think David the Agency, IDEO and Paradigm Talent Agency. Some have launched advertising technology or brand-engagement firms; Zamudio, for example, in launching Fooji, found a way to help brands like HBO reach social-media fans in the real world.

Others are working to advance marketing strategy for media behemoths Google and BuzzFeed; some are leaning into new brand-engagement mechanisms such as drones and AI.

List members are redefining marketing and driving technological innovation in the practice, as well as supporting industry and cultural priorities such as diversity and inclusion, women’s leadership, and social good.

Sayid Abdullaev, for example, works on brand marketing for Google’s YouTube. He also serves as an internal consultant on diversity and inclusion within YouTube’s marketing campaigns. A refugee himself, he has founded multiple initiatives for LGBTQ asylum seekers and refugees to help raise more than $1 million for a variety of social causes. Previously, he worked as a consultant at the United Nations, focusing on the World Humanitarian Summit and the UN Secretary General’s Agenda for Humanity.

Sivakami Sambasivam was a founding member of GoodRx, a company that seeks to curb soaring prescription drug prices, and now serves as senior VP of consumer marketing. Sheba Roy is kick-starting a diversity and inclusion program that pairs global tech companies with high-achieving college students from minority groups and others with financial challenges, in addition to her day job at Google. Ruiwan Xu founded CareerTu, a company that helps young people gain digital-marketing skills. And as the director of marketing at clothing company Reformation, Lauren Rothberg conveys the company’s story—how to lead and inspire a sustainable way to be fashionable.

And at big, legacy companies, list members are driving change from the inside out. Andrew Green, for example, leads digital innovation globally at the Silicon Valley-based Beer Garage, Anheuser-Busch InBev’s emerging tech hub, which applies emerging technologies to business challenges and consumer problems and sources investments for its venture-capital portfolio in innovation lab ZX Ventures.

And there are many more.

To vet the hundreds of nominations and identify the individuals, Marty Swant, marketing reporter, Samantha Todd, assistant editor, and I sought input and evaluation from an esteemed panel of judges who themselves represent the industry’s many dimensions: Dana Anderson, chief transformation officer at MediaLink; Rick Gomez, chief marketing and digital officer at Target; Elizabeth Rutledge, CMO at American Express and a member of the Association of National Advertisers CMO Growth Council’s talent task force; and Kyle Wong, a 30 Under 30 in Marketing & Advertising alumnus and founder of Pixlee.

When you’re building a marketing team — or inheriting an existing one — it’s common and convenient to look at the roles you have and the organizational structure to determine if you have the right stuff to succeed. Do I have my marketing operations person? And my product marketer? And where is my director who […]

Potential in symbiotic ties, marketing yet to be tapped

Name: Sanjeev Sinha Title: President, India Japan Partnership Fund and Group; Founding President, IIT Alumni Association Japan URL: http://sanjeevsinha.com/ DoB: Jan. 21, 1973 Hometown: Rajasthan, India Years in Japan: 23 Sanjeev Sinha prides himself on being a pioneer. The longtime Japan resident is hoping that he can help Japan and India to pioneer a relationship that better benefits not only both […]