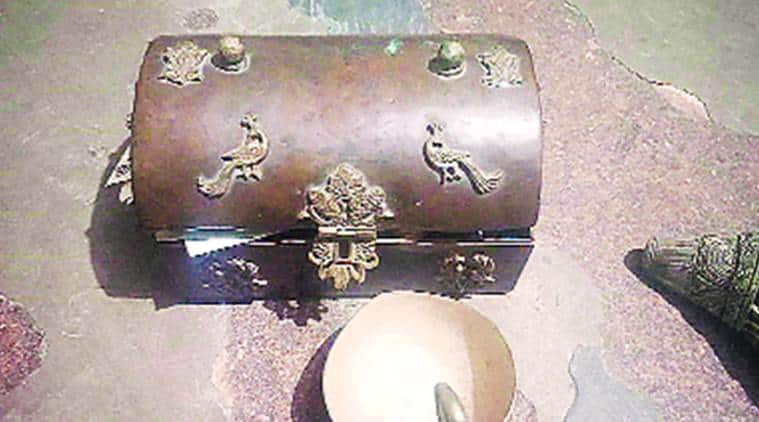 A growing stack of unread newspapers lying at the entrance of the three-storeyed locked house in Greater Kailash-I was a telling sign that aided a burglary worth over Rs 2 crore ten days ago.

On December 26, police arrested four people, including a woman, for allegedly taking off with brass and copper antique showpieces, gold and diamond jewellery, luxury watches, sunglasses and shoes from a house in GK-I while the occupants were abroad.

The accused have been identified as Raju, a history-sheeter, his wife Pinky, and their aides Hunny and Sageer. DCP (South) Alok Kumar Thakur said, “We received a complaint about a burglary in GK-1 on December 20. CCTV footage from the area was analysed, and the accused identified.” Two trunks full of jewellery and antiques were recovered from Raju’s house in Sultanpuri. His wife was arrested from Chandni Chowk, where she was going to sell the loot, said a senior police officer.

Businessman Alok Gupta told The Sunday Express, “My wife and I were in the US and returned late December 19 night to see every almirah and locker broken. All jewellery and antiques that belonged to my ancestors, and household items and cash were missing.”

A police officer said that in the CCTV footage, Raju could be seen crossing over the boundary wall of the house on December 15 around 10.30 pm and exiting at 1.30 am. Gupta alleged that as per footage acquired from other CCTVs, Raju entered the house five nights in a row.

Gupta said, “We wondered how one person could do it alone in a single night without being noticed by guards and neighbours. As per the footage, he was here five nights.” A senior police officer said that this angle is being explored. Police said that Raju has a crime record dating back to 1994. “During questioning, he said that the stack of newspapers, switched-off lights and the fat lock on the gate meant that the occupants were away,” said a senior police officer.

The dagger is estimated to fetch between $1,500,000 and $2,500,000. (@CHRISTIE’S) Mughal emperor Shah Jahan’s jade hilted dagger, the priceless jewels of the Nizams of Hyderabad, and a string of pearls belonging to Rajmata Gayatri Devi of Jaipur are among the 400 royal artefacts that would be auctioned on June 19 in New York. Organised […]

3 fun sports and fitness events in Austin this weekend