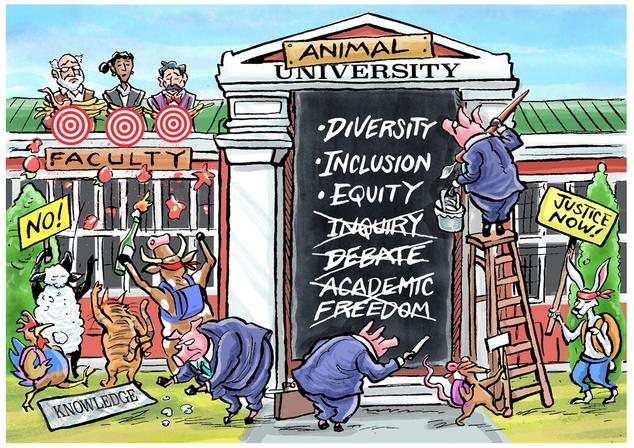 American higher education seems to be in a permanent state of crisis. Almost monthly, a federal court has occasion to reprimand some college or university for improperly chilling speech, even as some students continue to complain that campuses are too friendly to the wrong kind of speakers. Many institutions have cut back on faculty hiring, even as the cost of tuition grows. Two basic, and mutually reinforcing, phenomena are behind the chaos on campus.

First, colleges and universities have subordinated their historic mission of free inquiry to a new pursuit of social justice. Consider the remarkable evolution of Yale’s mission statement. For decades the university said its purpose was “to create, preserve, and disseminate knowledge.” The language was banal enough, but nevertheless on the money. In 2016, however, Yale’s president announced a new mission statement, which no longer mentions knowledge. Instead, Yale is now officially “committed to improving the world” and educating “aspiring leaders”—not only through research, but also through “practice.”

Second, American colleges and universities have been overwhelmed by a dangerous alliance of academic bureaucrats and student activists committed to imposing the latest social-justice diktats. This alliance has displaced the traditional governors of the university—the faculty. Indeed, nonfaculty administrators and activists are driving some of the most dangerous developments in university life, including the erosion of the due-process rights of faculty and students, efforts to regulate the “permissible limits” of classroom discussion, and the condemnation of unwelcome ideas as “hate speech.”

How did the university lose its way? How did this new alliance of activists and administrators supplant the faculty?

Though there are many factors, they all point back to a far-reaching intellectual confusion that pervades the nation’s campuses, from dorm rooms to classrooms. Too many in higher education are unwilling or unable to maintain a distinction that lies at the core of the liberal democratic project, and at the center of the West’s intellectual tradition: the distinction between inquiry and action, speech and conduct.

At one time, not so long ago, it was obvious that colleges and universities were the embodiment of this distinction, dedicated above all to serious reflection. Their purpose was to instruct students in methods and habits of free inquiry. It was equally clear what universities were not. They were not places to absorb and enforce “correct” answers to our unsettled social, cultural, moral or economic debates.

Maintaining that distinction between inquiry and action has always been crucial to academic freedom. It is difficult, after all, to obtain the truth while you are being bludgeoned into submission.

But today that distinction has been blurred, with nonfaculty administrators doing the blurring. Gone is the approach that I took for granted when I was one such administrator. As the legal adviser to three Yale presidents, I was pleased to think that my job was largely to protect our faculty from undue risks, so that the university could fulfill its core mission as a place of inquiry.

But now the ambitions of university staff are much greater. They seek to achieve diversity, inclusion and equity—defined, ever vaguely, on their terms. And so the nonfaculty staff—who, unlike the faculty, are dedicated to doing rather than deliberating—set the tone on campus.

A similar conceptual confusion has facilitated the rise of today’s student activists.

It may surprise you to learn that the faculty plays almost no role in the admissions process at most universities. Instead, that process has been handed to specialized “admissions departments.” Faculty members who want to be involved in admissions are relegated to toothless advisory committees, where they are lucky to be invited to glimpse the making of the sausage. Admissions “professionals” are less interested in traditional academic criteria, such as scholastic talent and intellectual openness, than they are in flashier virtues such as “activism,” “leadership” or “overcoming adversity.” Students now arrive on campus having been instructed to promote themselves as “social entrepreneurs” or “change makers.” It has become common for applicants to claim to have “founded,” at 17, some shiny-sounding nonprofit devoted to beneficent acts.

The contemporary admissions process thus reflects and advances a transformation of the university from a place of thought to an instrument of social action. Is it any wonder that students go searching for windmills at which to tilt?

As the new species of bureaucrats and student activists have come to dominate the university, they have reshaped it in their image. Wherever possible, they have sought to muddle the distinction between intellectual deliberation and political action—thus making certain thoughts, like certain deeds, into crimes.

What can be done to counteract these baleful developments? We must look to the faculty itself, which can still exercise substantial influence, even if only in self-defense. The faculty, besieged though it is, must reassert its historic centrality in the university and stand ready to protect the search for truth. If it fails to do so, faculty members have only themselves to blame for their disempowerment.

But the faculty needs help. Trustees and alumni have a role to play. Trustees can start by recalling their considerable legal authority. They should demand detailed justifications for each and every deputy deanship and assistant directorship that swells the bureaucratic ranks. Trimming nonfaculty staff positions would require effort, but it wouldn’t be impossible—unlike faculty, these positions lack the protections of tenure.

Alumni must also become wiser in their philanthropy. At big-name institutions, bureaucratic bloat is made possible by immense endowments and endless fundraising campaigns. For too long, the exchange has been simple: Donors provide funds and, in return, they receive recognition—but little influence.

This should come to an end. Donors should decline to provide single-lump gifts. Instead, donors should provide annual support for specific programs—but only as long as certain criteria are met. Of course, donors have no business telling professors what to teach or write. But neither should donors meekly trust that Alma Mater knows best.

Above all, concerned trustees and alumni should not shy away from using all available levers, including financial and political pressure, to reassert the university’s true mission.

If they fail to do so, our country—not just its colleges and universities—will be worse off. For even in this moment, our storied academic institutions still maintain a gravitational force, pulling in eager students from around the country, and, as important, from around the world, to learn in a free and open environment.

Indeed, reinforcements from abroad, attracted by the promise of what America’s institutions—including its colleges and universities—have to offer, may yet ensure that our country remains a source of inspiration and hope.

Indian students get cracking at coding early in life

Gone are the days when students in small towns planned to pursue traditional courses like calligraphy art or swimming during their annual summer breaks. These course are now increasingly being replaced by the likes of cybersecurity, professional gaming and different computer languages. While some of them are learning these courses to quench curiosity, others have […]

No need for sex education in schools or making it part of curriculum: RSS affiliate

The Shiksha Sanskriti Utthan Nyas, founded by educationist Dinanath Batra, suggested that there can be ‘need based counselling’ for students and parents. The National Education Policy draft states that sex education will also be included in secondary school for future judgement surrounding consent, harassment, respect for women, safety, family planning, and STD prevention.  |  Photo […]