In a career that has spanned over 18 years, Fernando ‘El Nino’ Torres was as whirlwind as the South American storm-cycle of the similar name. He has won the 2010 World Cup, and the 2008 and 2012 Euros with Spain. Was officially the world’s third best football player in 2008 – an accolade that disappointed many as objective observes of the game will enthuse that he deserves the second spot behind Lionel Messi and ahead of Cristaino Ronaldo. They wouldn’t be wrong. In that lightning burst at Liverpool, he was comfortably one of the most natural finishers football has seen since Luis Ronaldo. Why is it then that Torres finds himself at Sagan Tosu, in Japanese J1 league? 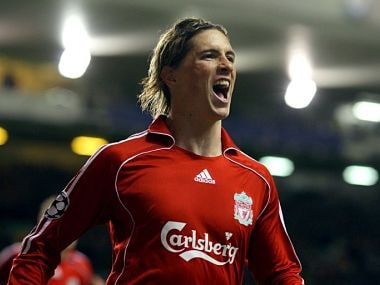 Once upon a time, Fernando Torres scored goals for fun for Liverpool. AFP

It will be easy to attribute the former Liverpool man’s demise to injuries. Having recurring hamstring tears and pull meant his body couldn’t cover the distance his mind already travelled to for a close-range tap in or a twenty-yard whip crack. It started in 2008 when Torres was at the prime of his otherworldly swagger. It was fed by a Liverpool crowd riding the wave of Rafaloution, an appropriation of the Liverpool way of winning through a Spanish methodology of Rafael Benitez. That year Liverpool coincidentally became the European of Culture, far-removed from right-wing ‘they-come-here-and-steal-our-jobs’ sentiments further down south of England. In fact, Liverpool were philosophically closer to Amsterdam than to London. ‘

The mood was aided by Javier Mascherano (Argentinian), Xabi Alonso, Alvaro Arbeloa, Pepe Reina (Spanish), Daniel Agger (Danish), Martin Skrtel (Slovakian), all foreigners, embodying what it meant to uphold the values of the city. There were shops selling paella pans in Liverpool; there was an increase in tourism in and out of the city to and from more non-traditionally British tourist traps; the drink mate later popularised by Luis Suarez entered tea-time routines; there was an upturn in women enrolling in Spanish language and salsa classes.

The Nike advert that year which showed the club Cavern change its name to Caverna, was merely a slight exaggeration of the pervading, surf-rock mood. Pet Shop Boys rang out of saloons and barber shops. The air was electric with collectivism generated by the movements from the team on the pitch. ‘The best midfield in the world’ song had a revision, and the Torres song rolled down the ramparts as often as tapas sellers yell out tapas outside Anfield. Torres was both the golden boy and a symbol of immigrant excellence. The flags that read Nunca Caminaras Solo (You’ll Never Walk Alone), Siempre Es Posible (Anything is Possible) and Scouse Solidarity were regular features. Torres was allowed to enter the heart and minds of Liverpool fans all over the world. Closer to home, legends like Ian Rush and John Aldridge would welcome comparisons between him and them – they were just as proud to be mentioned alongside a talent of his cloth and cut, as Torres was humbled to be compared to them. Veteran journalists, usually of spendthrift praise reminded us repeatedly that we were witnessing something generational. The Steven Gerrard – Torres dovetail was likened to the Kenny Dalglish – Ian Rush partnership.

How do you ascertain if a player is truly great? How does one differentiate between a good player and a great one? Watching the player should be an emotion. Ronaldinho was an emotion – copycats may come and go, but what he made the crowd feel will never be replicated. Torres was an emotion. For when he dribbled, he glided, he skated on ice, he slalomed on snow like a combination of a figure-skater and a skateboarder. He had both the elegance and the calloused edge. Someone who would always get up after hitting the ground.

Torres made old-school stoppers, at the very top of their games, feel dated. Nemanja Vidic and John Terry were given a glimpse of the future of the game where players don’t grow up wanting to be the next Terry Butcher of Claudio gentile anymore. Fernando Torres was in many ways a prototypical model of Mohamed Salah, a center-forward with both shot and chance creation rates and movement across the lines that defied the times. Torres was the James Harden of football before James Harden got drafted in the NBA. Running through the channels typified by his goals at Old Trafford, highlighted exactly how hard it was to mark him in full flight. In peak 2008, he had the katana-pace of Samuel Eto’o, the upper body strength of Lisandro Lopez and the old head of a Raul Gonzales. An understated part of his game was his heading – hangtime rivaled Boston Cetic’s Kevin Garnett. He was the punctuation to Liverpol’s verse, co-written by the aforementioned names. The balance was so fine that it gave off the looming lurk of tipping over. And it did.

With (almost) every romantic relationship, there is a process of falling out of love. The George Gillett-Tom Hicks ownership era accelerated that by a good ten years. Liverpool’s American owners were incurring massive debts levied against the holding of the club. This meant Liverpool hung on the verge of being owned by a bank unless sold off. The debt made club look a dog with fleas circa 2010.

Ever before his football education, he was brought up in the barrios of Fuenlabrada, where the walls are so thin that neighbours knew exactly what each other’s problems were. He’s thrived in the narrative of the underdog. The Spanish phrase to that is ‘sentimento de rebeldia’ – a sentiment of rebellion, the act of waving skinny fists at oblivion. His father, a retired policeman, infused the value of the hustle. His club, Atletico Madrid, the mongrel club of Madrid, in the shadows of Real Madrid, infused him his motivations.

While his career at Chelsea was trophy-laden, with the UEFA Cup. FA Cup, and the Champions League, he was never the same player. His sense of purpose and drive was corrupted playing for big bullies. He admittedly felt distant from football. His spell at AC Milan will end up being a trivia question. He was able to reclaim some dignity and motivation coming back to Atletico. It was nothing less than what he deserved, in a career that deserved so much more.

His controversial sale from Liverpool to Chelsea was engineered to make Torres take the full-brunt. He was given a contract extension following his first Euro Cup triumph to maintain the valuation of a club in the middle of a sale. He was sold by Liverpool to accrue funds. He was made to feel like a commodity by Damien Commoli, Christain Purslow, the club hierarchy. In an interview with Liverpool journalist Simon Hughes, he admitted he wanted to stay, but he was never told that he was needed for legacy-building or for football reasons.

Yes, Torres did play through injuries for Liverpool and Spain, thereby robbing him of his prime attributes. But Torres’ story is so much more than a player whose career winded down due to injuries. It’s much more human than that. Here’s a boy who turned into a man by being the youngest captain ever at Atletico Madrid, here’s a man that had 65 goals in 102 appearances for Liverpool.

Torres, for most Liverpool fans, was their first love. He made us want to elucidate, articulate, express in various degrees, colors, rhymes, shades, and meters, the kind of ways he scored those goals, and the ways Liverpool fans loved him. Which was one and the same thing on most occasions.

Torres was a footballer that made Liverpool fans feel the extremes of the emotional spectrum, emotions that no other Liverpool player will ever nestle into. He was a working-class hero, one of them, but as the narrative would want you to believe, was ultimately lured away by riches of Chelsea. That is only, of course, the story the clubs wants you to believe.

The Iberian prancer, who made defenders feel befuddled like bulls at Pamplona. Feranado was football’s finest matador, capable of eliciting equal bouts of nostalgia and pain. Fernando Torres represents a story of repressed romance, the kind Liverpool fans need to come to terms with it in order to move on and love fully again. But ultimately, Torres’ tale, seen from whichever way, is a cautionary story of putting the prize ahead of the process. Liverpool could have had a legend, had they not cashed it.

Your guide to the latest cricket World Cup stories, analysis, reports, opinions, live updates and scores onhttps://www.firstpost.com/firstcricket/series/icc-cricket-world-cup-2019.html. Follow us on Twitter andInstagram or like our Facebook page for updates throughout the ongoing event in England and Wales.

Proper nutrition is one of the most essential elements to being healthy and living a long life. People deal with food every day, and food has been a part of life since the beginning of civilization. What we eat becomes our diet, and our diet plays a major role in deciding how healthy we are […]

Suppose you’re stuck in traffic, late for a meeting. You bang the steering wheel and explode, “Damn traffic! Now, I’ll probably get fired!” You’ve just fallen into a mind trap. You’ve added a catastrophe with no evidence for it. Your thoughts about the traffic are causing distress, not the traffic. When you’re under stress, it’s easy […]

Scorpio, ambition promises to take your sexy quotient up a notch and make you irresistible to money, opportunities and power. On the downside, somebody you’ve been working with could disappoint in multitude of ways. Could this be the end of your association? Only time will tell. Cancerians in business partnerships could face a similar situation. […]

Your Data-Driven Marketing Is Harmful. I Should Know: I Ran Marketing at Google and Instagram

Three Ways To Boost Your Marketing Campaigns With AI