Many jewellery fabricators globally remain closed due to the government-mandated lockdowns to contain the spread of COVID-19. The cost to the industry has been immense, not just in production losses, but to the tens of thousands of employees in the industry.

In Q1 this year, we estimated that jewellery fabrication slumped 40 percent on a year on year basis, dragged lower by elevated gold prices, economic uncertainty, and the country wide closures in China during this period, but the impact in Q2 will also be substantial, and perhaps even greater, as more key markets, including India, have completely shut down operations and are yet to reopen.

These closures, coupled with limited consumer interest in discretionary items currently, will likely see many jewellery fabricators (and retailers) go to the wall in the coming months, forcing many out of the industry.

While many Chinese jewellery fabricators have reopened and started production, most fabricators elsewhere remain closed as a result of COVID-19.

The impact on overall fine gold consumption has been acute with there being almost no real demand for fresh gold from this segment. Asia dominates this sector, at over 75 percent of global fabrication, and it is these markets in particular in that have been severely impacted.

Many of the larger fabricators started to wind down production during the last two weeks of March as demand evaporated and were forced to reduce their workforce in a bid to remain operational. However, as the pandemic worsened in early April, they were forced to close entirely, sending their employees back to their villages. 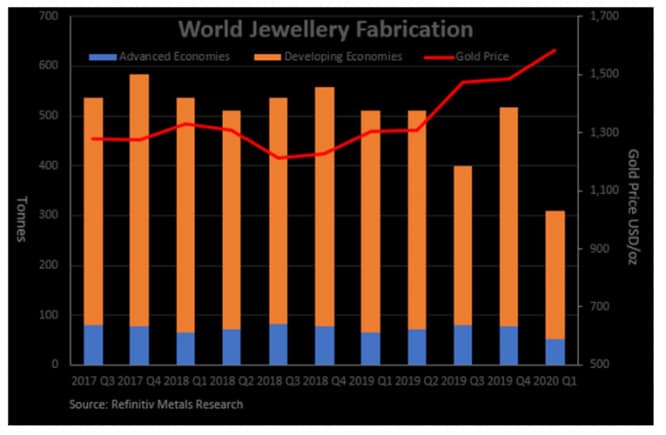 While in some markets, particularly in industrialised nations, there has been financial assistance offered to both the workers that have been let go and to businesses so they can remain viable and survive the shutdown, this kind of assistance is not always available in the developing world.

Often it is up to owners of the businesses, mainly privately owned and family run, to weather the storm and for the workers to take care of themselves once their leave entitlements have been exhausted.

The loss of income, and the impact that has had on workers who are already earning very low wages, has been telling with many struggling to survive. In some countries, where possible, factories have paid additional leave, or allowed workers to receive payment for leave not yet accrued to assist. So, where to from here? Most major fabrication centres remain closed or are in the very early stages of ramping up production. In most instances where local governments have permitted them to restart, factory owners are taking a very cautious approach with fabrication volumes at minimal levels.

Many of these Asian markets focus on exports, and with little to no consumer demand across much of the world as retailers remain closed there no desire to produce jewellery if there is no end market.

There is light at the end of the tunnel however for some, with several industrialised nations signalling during this last week they will be gradually reducing lockdown measures and allowing retail outlets to reopen. That said, several key markets, such as India, Indonesia, and many countries

across the Middle East, remain in full or partial lockdown with factories forced to remain shuttered until at east the end of the month. What is the expected impact on gold demand from these closures in Q2? It is difficult to estimate just how severe the overall impact will be, but it is clear the impact will be massive. Several key regions will have already lost at least six weeks this quarter, with many more than that, so the drag on consumption rates globally will substantial.

The only market to have fully reopened remains China, and demand on the ground there remains moribund by the economic weakness and elevated

gold prices, with demand well down on previous years. Unless we see a surge in demand from India as the country is released from lockdown in just over a weeks’ time, an outcome we don’t believe will occur given the price level, global demand in Q2 will be at least 60 percent lower than 2019 levels, and this in our opinion is an optimistic outlook.

Demand for jewellery will undoubtedly rebound as consumers globally return to work, but with gold prices expected to trend higher as we potentially slide into a global recession, and as economic conditions worsen as governments come to terms with the cost to the economy of their stimulus measures, demand for jewellery will likely be casualty of belt tightening. For those across the supply chain that survive the closures and remain in the industry, it will surely be a difficult year with many

more forced out if demand does not pick up and pick up quickly.

The sale also included an antique 33-diamond necklace once owned by the Nizams of Hyderabad, which sold for nearly $2.41 million (Rs 17 crore), Christie’s announced on Twitter.(HT Photo) A “once-in-a-lifetime” collection of royal Indian jewellery fetched over $109 million in the United States, with a 17-carat Golconda diamond, a ceremonial sword of the Nizams […]

KGK Group, founded by Shri Kesrimal Ji of Jaipur in 1905, began with a humble task of trading coloured gemstones from India. Shri Ghisilal Ji Kothari joined forces with his visionary father to expand the business from Jaipur to Chennai and Rangoon in Burma to Hong Kong. With a team of 12,000 members with offices […]

Fernando Torres retires: Striker’s career is a cautionary tale of putting prize ahead of process